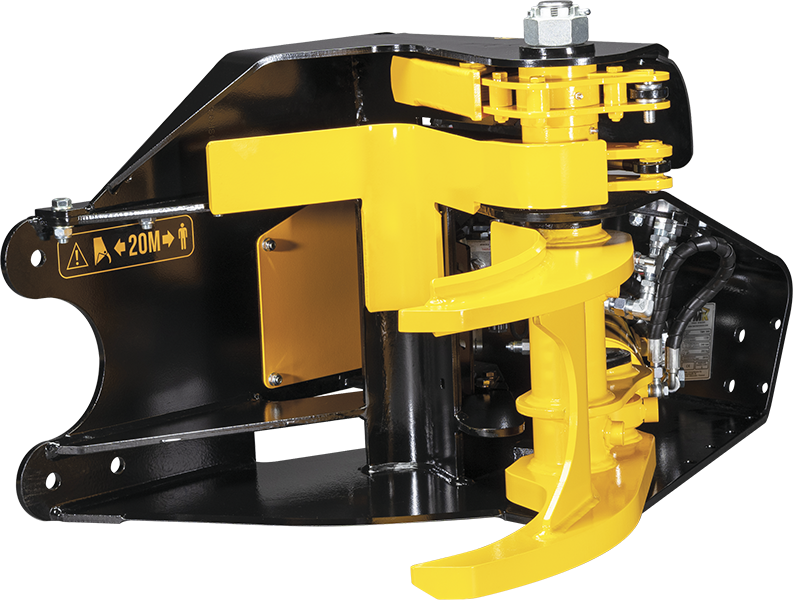 TMK 300 is the beginning of the TMK product family. TMK 300 has the widest attachment options of all TMK products, and that makes TMK 300 into one of the most versatile shears on the market. Easy operating makes the TMK 300 a great choice for small scale users, and with very high productivity it fits perfectly for the professionals in the industry.

Grow with your work
+ 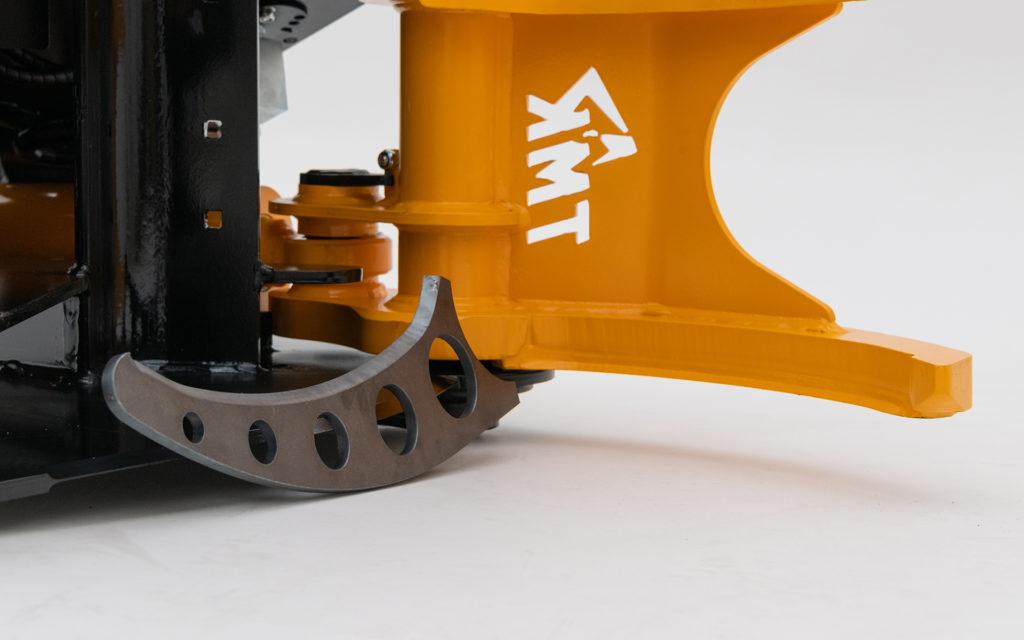 All the foresters know that the small and nimble twigs are a pain in the bum, especially in the springtime. They seem to always find a little gap where to squeeze in and come up with roots and make a mess, which does not please the chipper operator either. Our BrushGrapple removes the gap between the grapple and the blade and now the twigs won’t have any space where to squeeze in from. The Grapple has a one way sharpened blade which acts like a pair of scissors and makes sure even the smallest sticks are cut down cleanly with ease. And the best part is that it also helps a bit with the bigger trees, now that’s what we call a win-win.

With the TMK BrushBlade you can make sure that even the smaller twigs are cut cleanly. The bolt-on extra blade is sharpened one way and removes the extra gap between the blade and the grapple arm. This creates even more of a scissor-like motion and even the most flexible little bushes get cut cleanly. The chipper operators dream! TMK BrushBlade is good for trees between 0 – 15cm and should not be used for larger trees. 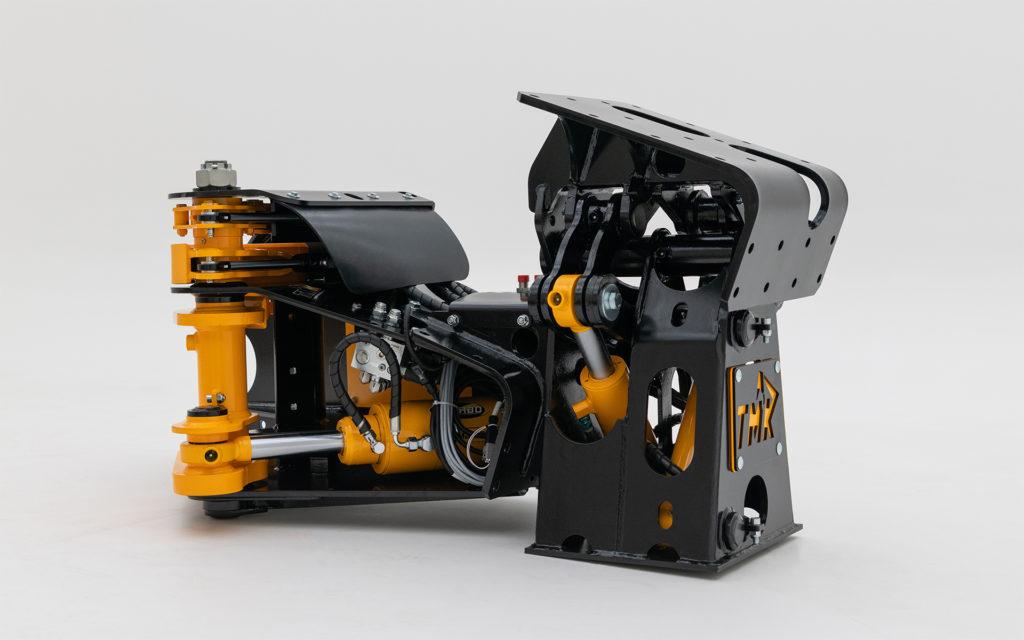 Do you want to cut overhanging branches? Or just operate in unloved terrain efficiently and leave the stump as low as possible? Or need a little bit more agility to stack the trees neatly? The tilting unit is just the feature for you. Tilt fits both TMK 300 and TMK 400 and is robust enough to withstand the challenges of hard work in the forest. It tilts 90° both ways, so it’s a great tool to cut down overhanging branches, but also gives more agility to operating the shear and moving the cut down timber. Tilt can be controlled with a separate hydraulic line, or with the same line as the shear with the help of a 6/2 electric valve.

The collector increases the productivity of the shear significantly. Collector works automatically with open-close motion all the way to the point where the bunch is dropped. When the shear is closed, the collector opens up to the other side of the trees, and when the shear is opened again, the collector first grabs the trees firmly in its grip. This way the trees stay all the time firmly in hand. Only when the bunch is dropped one electric line is needed to let the bunch go from the grip. Collectors simple operation enables fast and comfortable working. Thanks to its high productivity, the collector is TMKs most popular attachment worldwide.

NEW! Collector is now available also without electricity! Ask more from your local dealer, or directly from TMK. 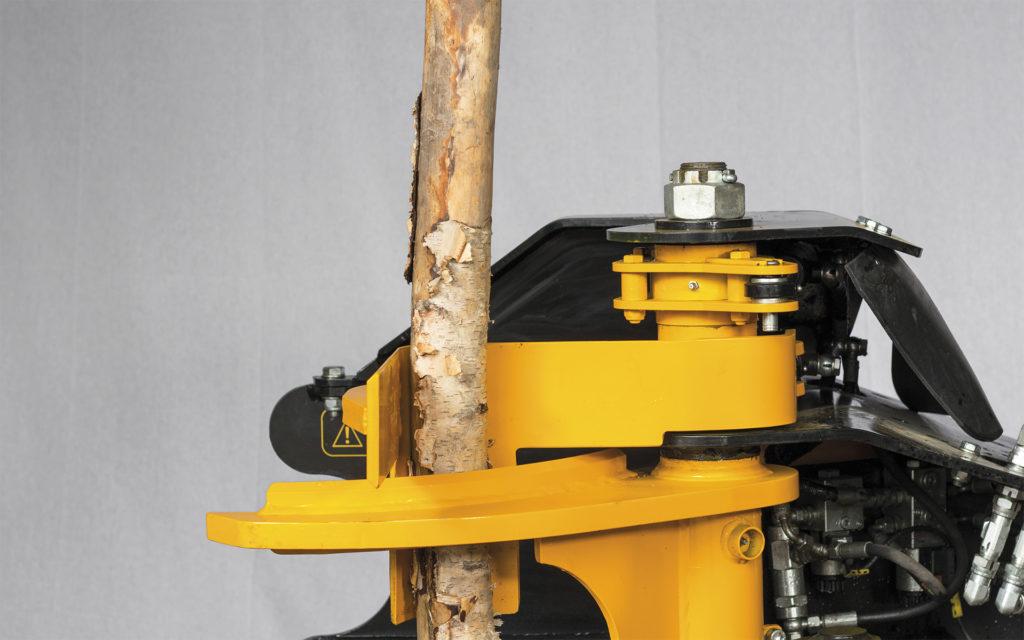 Delimbing gives the last touch to the tree clearing as well as the TMK 400, TMK 300 & TMK 200 attachment package. TMK has the first easilly controllable delimber on the market without expensive feeding systems. Delimbing is smooth thanks to the diamond shaped delimber hole. This shape gives the shear a little room to tilt before snapping the tree with the blade. This way is ensured a fast and smooth motion, when the delimbing is fast and more importantly easy. In the nordic countries the delimber is really common attachment because of the demand of stripped trees. Delimber is also possible to use without electricity, and delimber is also easy to retrofit. 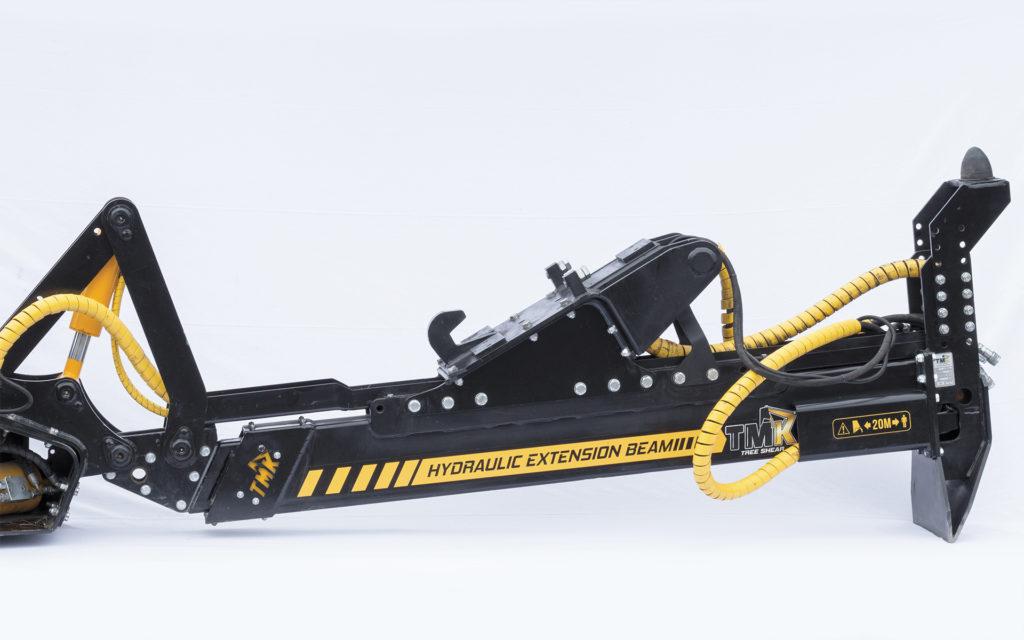 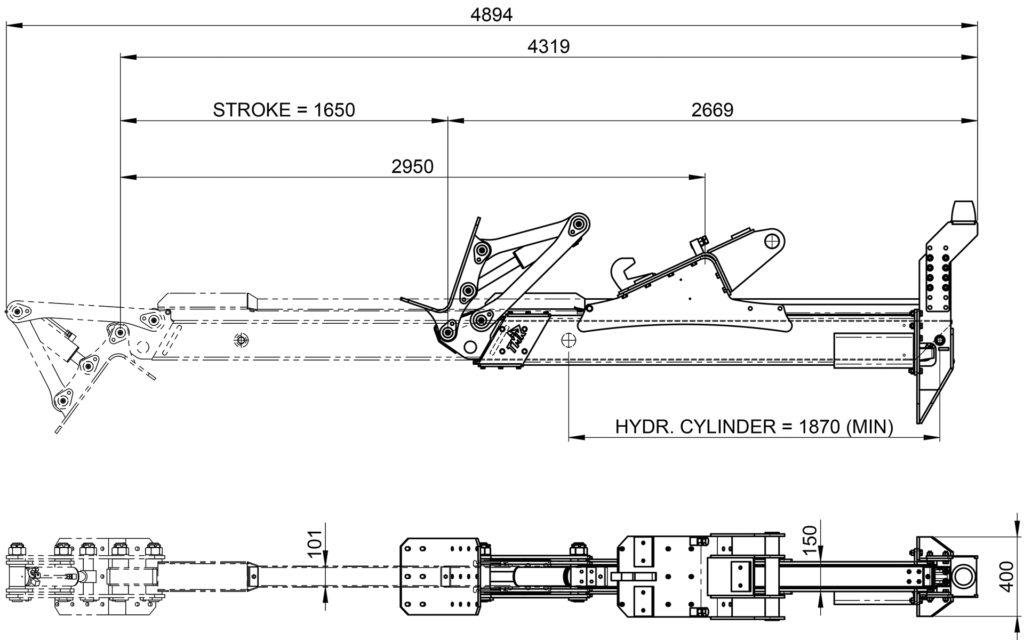 TMK 300 can be equipped with solid extension beam. Bolt attached plates enables the beam to be taken off easily, if it doesn’t suit the job at hand. Extension is a good fit especially with delimber, as it makes the motion faster and smoother thanks to longer reach. Solid extension was designed to work with tiltrotators to ensure that the sensitive hoses doesn’t get damaged in the bushes, but kept in a safe distance from the branches and minimize the damages. 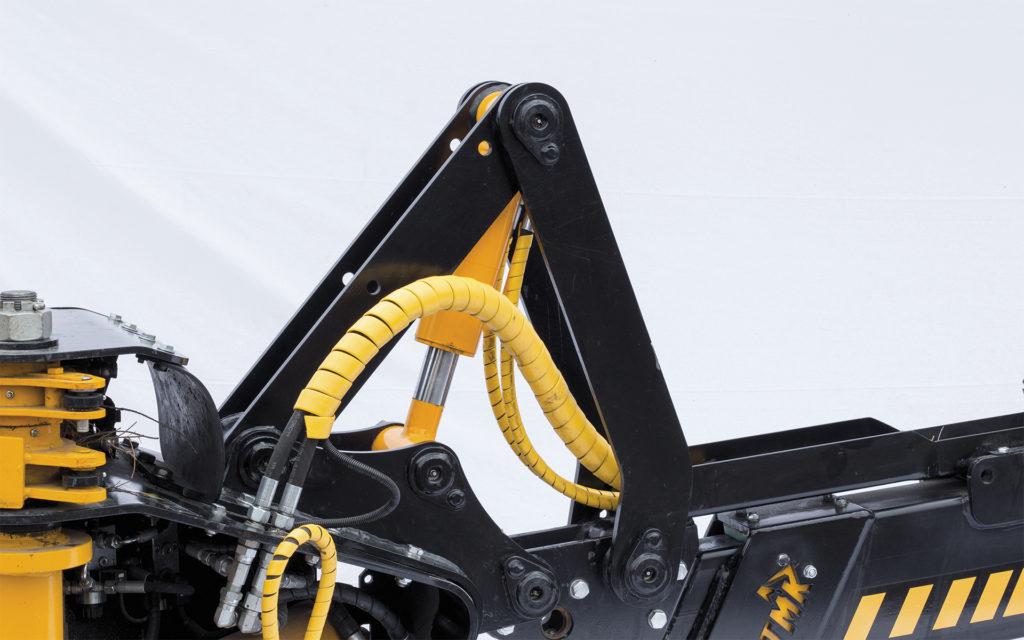 TMKs Linkage brings more speed and versatility to TMK Tree  Shears use. Linkage was originally designed to speed up the working with hydraulic extension beam, but now it enables the shear to be used in machines that doesn’t have a feature to tilt  the shear up and down. Now we can offer a solution to use the shear with tractor cranes and  harvesters. Linkage tilts 165 degrees, which ensures wide movements and small enough cylinder keep the motion fast. Linkage is attached to the shear with bolts, so it can be taken off quickly and used again on a different machine when needed.

NEW! In cooperation with Palfinger we made a linkage that is fits directly to all EPSOLUTION series cranes! Ask more from your local dealer, or directly from TMK. 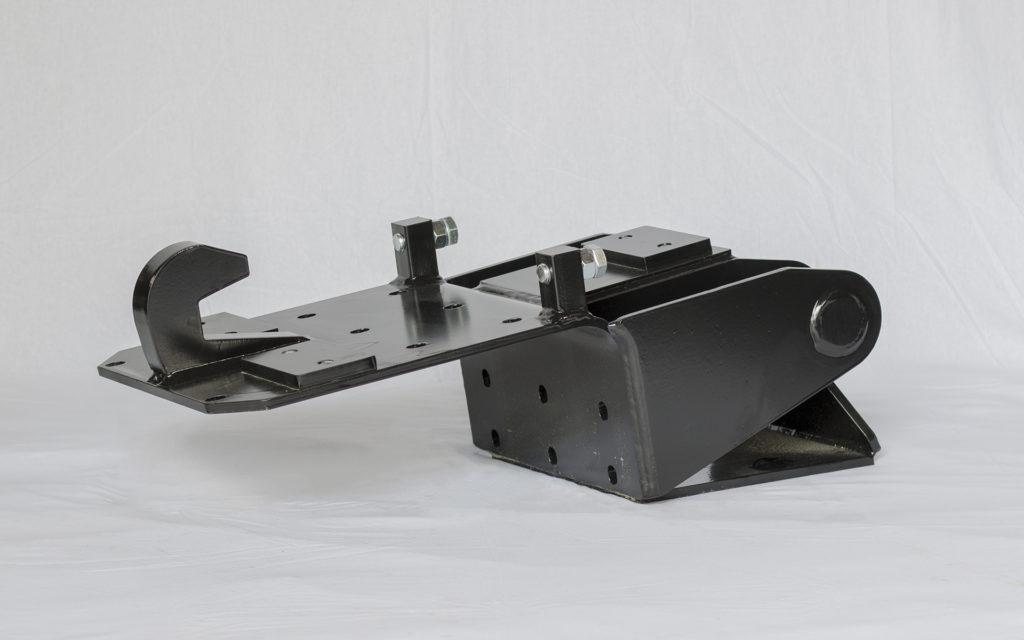 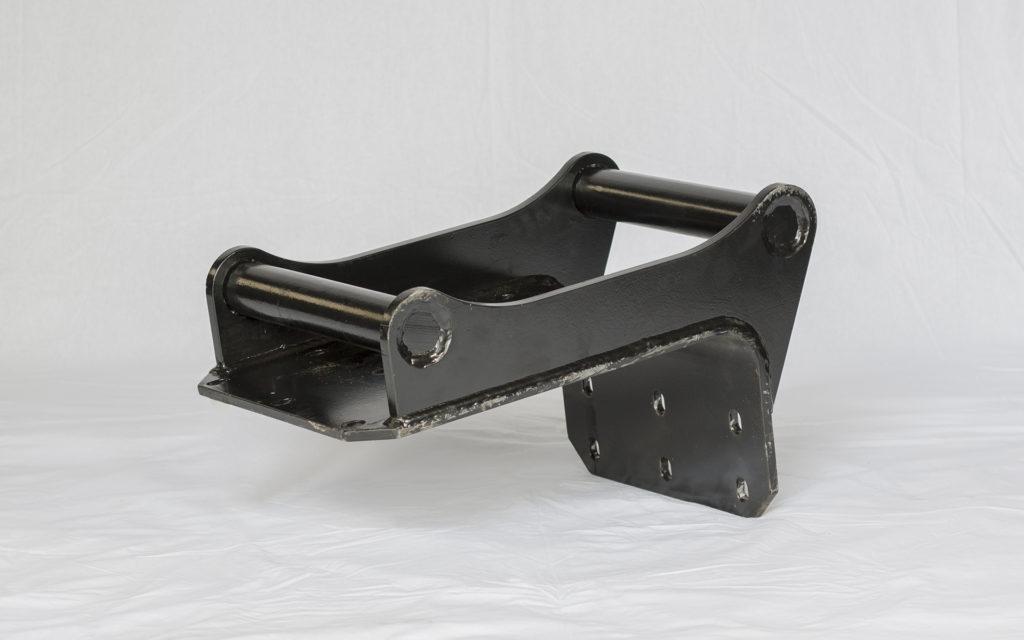 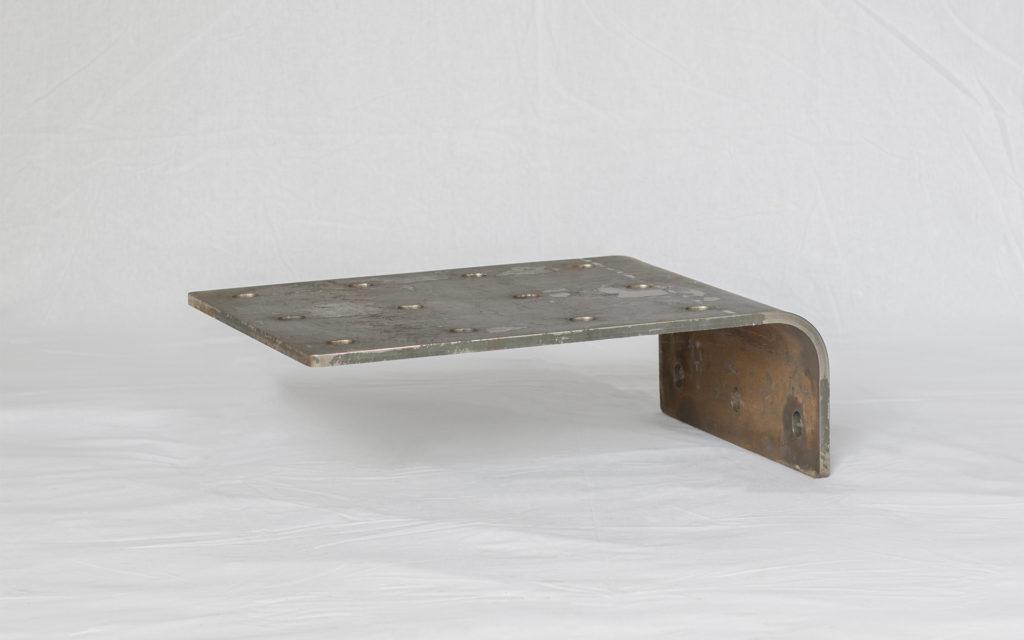 Brackets are on bolt-on fitting plates, this makes it possible to use the shear with multiple machines. 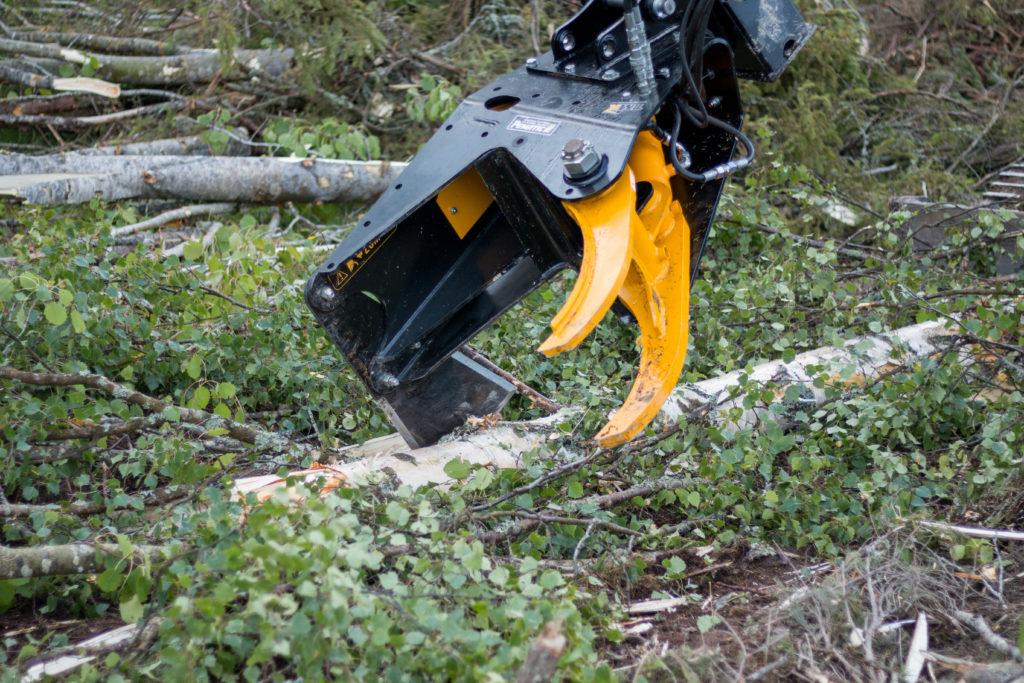 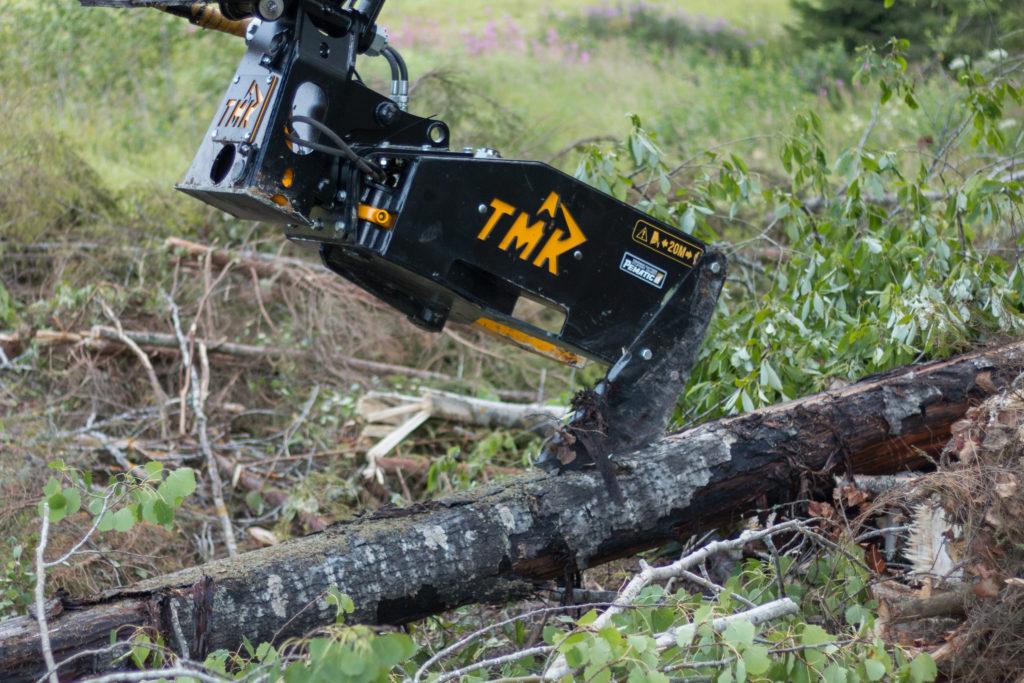 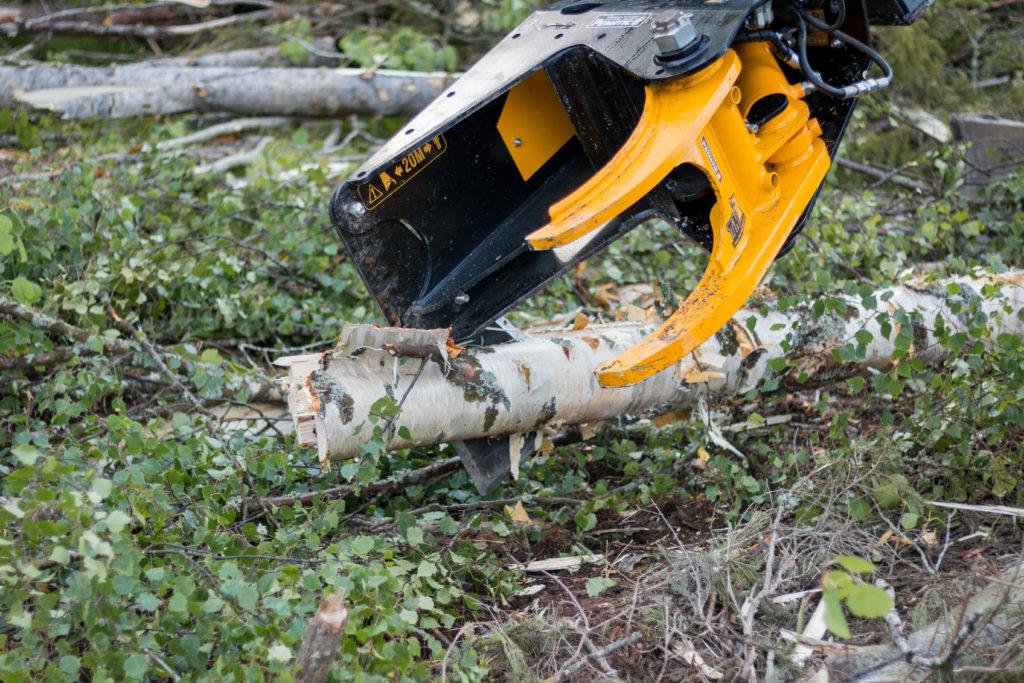 With the heel you get more support and reliability to the shear when moving in any terrain. You can safely take support with it, no matter the size of the machine. The heel attaches to the backside of the shear with bolts offering good support point when moving with the machine. 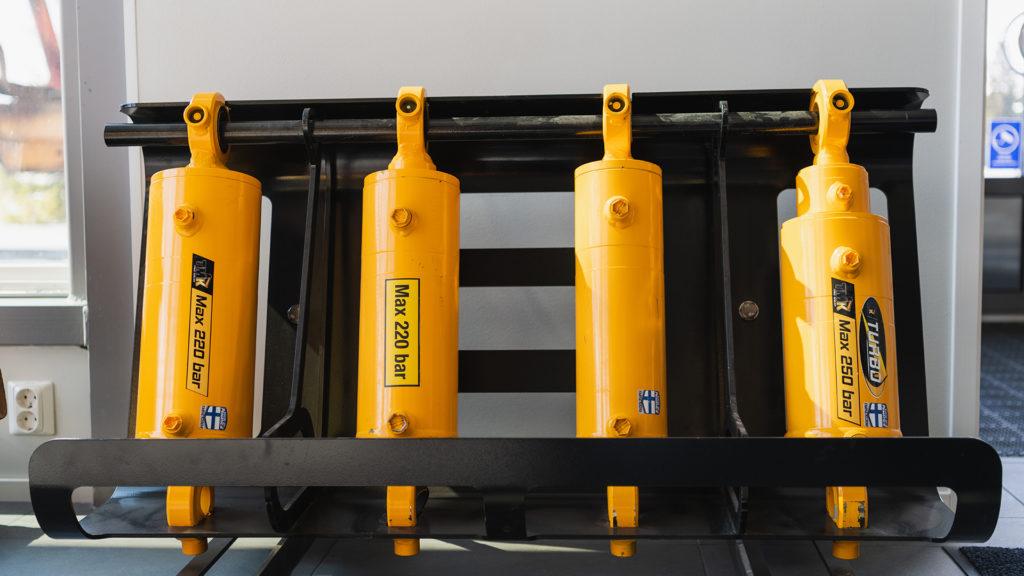 TMK 300 can be equipped with different cylinder options.

1. Normal main cylinder, recommended pressure 180-250 Bars.
2. Bigger main cylinder, recommended pressure 160-180 Bars.
3. TMK Turbo is patented telescopic cylinder, where the smaller cylinder works always first, keeping the motion fast. When the smaller cylinder runs out of power, the bigger cylinder starts working automatically. This way we get really fast motion without sacrificing the strength at all. TMK Turbo and bigger main cylinder are excellent choices when working with tilt rotators, when the reduced pressure doesn’t affect the maximum cutting capability. TMK Turbo grows your work efficiency up to 15%!
4. HD cylinder, The power house especially for smaller machines and North-American market. When the pressure is limited but we still need to take down big trees, the HD answers the call. With 34,5 tn force – even a smaller machine can take down the giants.